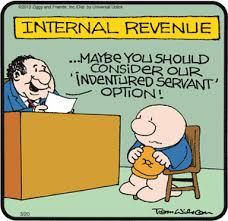 The concept of Indentured Servitude was born of the critical need for labor in the early British colonies in North America and the Caribbean. Only the wealthy could afford passage to the colonies so to solve the problem, the Virginia Company developed the concept of Indentured Servitude. The program allowed the poorer potential immigrant to trade his labor for a set period in exchange for passage to America. The first indentured servants arrived in America sometime between 1607 and 1617. The program was an extreme success with one-half to two-thirds of all immigrants who came to the Americas being indentured servants.

The success of indentured servitude was based on the terrible economic conditions in Britain and the Rhine area of Germany in the 17th century. A combination of few jobs, very low wages, and too many workers resulted in most workers living in poverty with no hope of improvement. Jobs were abundant in the colonies and the need was growing every day. The poor workers could not afford passage to the British colonies, so indentured servitude was their only ticket to a better life.

Indenture contracts came in many varieties. The most common was for hard labor but indentures were also found in the trades and clerical work, particularly in the northern colonies. The terms of servitude ranged from one to seven years with the most typical being four years. The vast majority of indentures came willingly, but some were forced, some were prisoners avoiding prison and some came in response to misrepresentation by recruiting agents.

Many ship captains also got into the business of obtaining indentures because it was so profitable. They sold passage to the colonies to those who could afford the cost. Those who could not pay were contracted to the captain. Upon arrival in a colonial port, the captain advertised the price for the various skills on board and sold the contracts to colonists who needed the labor.

Indentures were found in all the colonies, but the greatest concentration were in the Chesapeake Bay region and the Upper South. This was the area of the great estates with labor-intensive crops such as tobacco, rice, sugarcane, and cotton. Their very existence depended on the availability of large numbers of laborers. Most trades and clerical positions were in the north where industrialization was taking its first baby steps.

Some colonists sold their children into servitude so the children could learn a trade and the parents could earn cash. Also, many indentured children were relatives of colonists who used the system to bring family members to America and to profit from their labor.

Indentured service was often extremely hard with harsh working and living conditions and harsh discipline. Indentures had little in the way of legal rights. They were not free and had no political rights until they had completed their financial obligation. Many did not live to see that day because the average life span of the time was short particularly for those doing the hardest physical labor.

Indentures were the property of their sponsor for the period of the contract and some owners beat and raped them. Some were starved, and did not receive adequate shelter, clothing, or medical care. Females who got pregnant were punished by their service periods being increased more than nine months. Indentures were sometimes treated worse than slaves because slaves had value.

It is not surprising that many indentures ran away but they were relentlessly pursued and severely punished when captured.

Once the term of indenture was completed, the individual was freed and received a payment known as a “freedom package.” This could include land, seed corn, arms, a cow, and clothing. Those who had served on southern plantations often moved west and established their own farms. Others that had served in the trades had no problems finding employment or setting up their own  business. They all had many advantages over new immigrants. They were familiar with where the most opportunities existed, some had very generous freedom packages, and they had already become “Americanized.”

Indentured Servitude was driven by supply and demand and its demise actually began as the number of unemployed workers in Europe declined and other economic factors began to improve in about 1650. Fewer people needed to become indentured servants. Concurrently, the cost of indentured servitude to sponsors was gradually increasing.

The increased availability of black slaves was also competing with Indentured Servitude. The supply of slaves began to significantly increase by the 18th century driving their cost down. Slaves were owned permanently, had no “freedom package,” and were renewable.

In addition to the effects of supply and demand, planters and others found that some freed indentures became competition as they began their own farms and businesses. The large numbers of freed indentures from Chesapeake Bay and Upper South plantations that moved west to set up their own farms soon were in conflict with the Indians. The Indians had become comfortable with the whites staying in the tidewater areas. This conflict caused a social, security and political crisis but the Royal Governor William Berkeley would not support the settlers. He did not want to alienate the Indians because he had a monopoly on the lucrative fur trade. This situation resulted in “Bacon’s Rebellion” in 1676.

Although a few freed indentures became highly successful and wealthy, the vast majority joined what we now refer to as the “middle class.” It was this hardworking group that became the backbone of the economy. They had survived the treacherous sea journey, and harsh servitude, and were happy to have a modest life as freemen in the rapidly developing colonial economy.

Indentured Servitude was responsible for rapidly increasing the population of the British colonies significantly. These were working class people who usually had large families and their descendants multiplied exponentially. They had worked hard to be Americans and they were proud. Without Indentured Servitude, I do not believe we could have had enough population to successfully fight a war against the might of the British Empire. Great happenings in history often turn on seemingly insignificant events such as the Virginia Company decision.

Indentured servitude is often confused with bound apprentices. The latter was a social program for orphans and children from impoverished families that were under the control of the courts. They were bound out to work as apprentices until a specified age. It was a good program since it kept these children from being supported by taxpayers and prepared them to be productive members of society. Benjamin Franklin was a bound apprentice who illegally fled his apprenticeship to his brother. Another famous bound apprentice was Andrew Johnson who became vice president and upon the death of Abraham Lincoln, became the 17th president of the United States.