Religion has always played a part in the establishment and development of the USA.  During my research I have often found reference to the “Great Awakening” which occurred during the 1730-1740 colonial period. Two other awakenings occurred later. I will cover all three, but the first was the most important.

“Awakening” refers to periods of Christian religious revival, and they spread throughout the colonies. They influenced people’s attitudes, beliefs, and conduct, which in turn influenced government. They also strengthened and increased the number of faiths that tend to be more fundamentalist, such as Methodist and Baptist.

I am writing this article because religious awakenings are a part of our history and because of my own fascination and interest. I grew up in the south Missouri Ozarks which was dominated by fundamentalist Christian churches. The most dominate was the Southern Baptist which my family attended regularly.

At the time, revivals were a way of life in the Baptist church, and I vividly remember the “hell-fire and brimstone” revivalist preachers (evangelists). They were extroverts, personable, dynamic and they easily appealed to people’s religious emotions. I always looked forward to the revivals because the preachers were not only great men but were fiery speakers as well. My experience was a micro-version of the Great Awakenings.

During the early 1700’s religious domination in the American colonies was divided by section. The Congregational Church dominated New England. The middle colonies were more diverse with Quakers, Anglicans, Lutherans, and several others represented. The south was dominated by the Anglican Church.

All religious practice in America prior to the Awakenings was greatly influenced by the European philosophical movement known as the “Enlightenment” or “Age of Reason.” This movement questioned the legitimacy of religion while emphasizing scientific and logical thought. This directly attacked the faith of common people who became disillusioned with all organized religion.

The colonial establishment churches were mostly theocracies controlled by the elitist high-born and wealthy. Common people were second-class members at best with essentially no say in anything. The churches certainly had no room for a “personal God.” Services were structured, concentrating on form rather than substance, and were anything but interesting. Attendance was poor and continued in a downward spiral. Many common people craved a personal faith.

The First Great Awakening began in the 1730’s and continued until about 1740. There had been earlier isolated pockets of revival, the most notable led by minister Solomon Stoddard of Northampton, Massachusetts. He was the grandfather of the first great evangelist, Jonathan Edwards. Edwards took over Stoddard’s church in 1729 and preached there for nearly ten years. His ministry is recognized as the start of the Great Awakening.

Edward’s ministry centered on a personal approach to religion and religious unity, which bucked the New England Puritan tradition of religious intolerance. He preached that all humans were sinners, that God was an angry judge, and that every person needed to personally ask for forgiveness. His ministry emphasized an emotional, spiritual, and personal relationship with God, and resulted in hundreds of conversions.

The second important evangelist during the First Great Awakening was George Whitefield a preacher from Britain. He was known as the “Great Itinerant” because he preached all over the American colonies and Europe. In only one year, he traveled about 5,000 miles in America and preached more than 350 times. In 1739 he made a “triumphant campaign” from Philadelphia to New York and back to the South. In 1740 he left Boston for a 24-day journey through New England preaching to “large and tumultuous” audiences. His farewell sermon in Boston was said to have attracted 30,000 people.

Whitefield’s style was charismatic, theatrical, and expressive. He would often shout the word of God and tremble during his sermons, which captivated his audiences. He preached to common people, slaves and Native Americans. No one was out of reach to Whitefield, and his words reenergized the once-waning Christian faith. Thousands joined local churches and they in-turn changed those churches.

Although no others reached the fame of Jonathan Edwards and George Whitefield, several other important evangelists were conducting revivals all over the colonies. This included David Brainard, Samuel Davies, Theodore Frelinghuysen, and Gilbert Tennent. They had different backgrounds, but their messages were the same as the more famous evangelists and helped change religion in America forever.

The “Great Awakening” greatly altered the religious climate in the American colonies. Establishment churches were fractured into two factions, those that supported the status quo (“old lights”) and those that did not (“new lights”). It also gave rise to expansion of fundamentalist churches such as the Methodists and Baptists.

Many historians believe (and I agree) that by making religion about salvation and a personal relationship with God, the Great Awakening encouraged revolutionary notions of nationalism, individual rights, and religious freedom. The awakening introduced the common people to the idea that they did not have to be second-class in anything, and that they had “rights.” This was a revolutionary concept at the time, but once people get a taste of freedom it is nearly impossible to put the “Genie back in the bottle.” This conditioned people to accept and believe in American nationalism and was another nail in the coffin of Imperialism in America.

The Second Great Awakening took place from about 1790 to about 1850 and was less emotionally charged than the first awakening. It began in New England and spread to all parts of America but was particularly strong in the Northeast and Midwest. It also appealed to the less wealthy and less educated and became centered in the so-called Burned-over District in western New York. This district was named for its abundance of “hellfire and damnation” preaching.

The Second Awakening was again an evangelical movement in existing churches and produced new religious denominations and communal societies. The new religious denominations included the establishment of free black churches which were completely beyond the control of white segregated churches and one of the most influential black preachers was the Reverend Richard Allen. He founded the highly respected African Methodist Church.

The abolition movement was instrumental in the election of President Abraham Lincoln in 1860. Abolitionists were heavily represented in the Lincoln administration playing a significant role in the conduct of the Civil War and Reconstruction.

Women’s Rights groups have grown over the years, but gains have come slowly. The most significant strides were not made until the 20th and 21st centuries.

The Temperance Movement physically broke up bars and saloon businesses for years. Their efforts paid off by ratification of the short-lived but disastrous 18th Amendment to the US Constitution in 1919.  Prohibition was finally repealed by the 21st Amendment in 1933.

The Third Great Awakening began during the 1850s and ended in the early 1900s. It was characterized by new denominations, active missionary work, and a Social Gospel approach to social problems.

The YMCA was founded in 1844 and played a major role in revivals in the cities and during the Civil War. There was strong religious leadership, such as evangelist Dwight L. Moody who acted as “chaplain” to minister to the Union Army during the Civil War. Moody also established a church in Northfield, Massachusetts and the prestigious Moody Bible Institute in Chicago, Illinois.

The Sanitary and Christian Commission was another organization that operated during the Civil War. It provided religious guidance, supplies, and medical care to Union troops.

The Freedmen Society was formed in 1859 by the American Missionary Association. Supported by northern churches, it provided teachers and funds to establish and operate schools in the south for freedmen and their children. Between 1859 and 1872 they established at least 500 schools with teachers that were 50% white southerners, 33% black (mostly southerners), and the remainder were northerners. They significantly raised the literacy level of blacks in the south. Interestingly, virtually none were abolitionists.

Some believe there was a Fourth Great Awakening, but it is not generally accepted by historians. The argument for it is not supported by many facts, is very nebulous, and there was no national effect. I agree with those who believe it did not happen so I will not discuss it in this article.

Many Revivals have been conducted since the Great Awakening and are continuing today but there has been no true “national” movement. Today the country is so large and diverse that a national movement like those in the past seems nearly impossible.

The effect of the Great Awakenings on early America was profound. All three resulted in significant religious change and social development. In addition, the first awakening’s influence on the lead-up to the Revolutionary War cannot be overstated. Evangelical religion stresses free will, equality, morality, and the belief that God is sovereign with all things under His complete control. Our founders embedded these profound beliefs in our Declaration of Independence and Constitution, and they have sustained us for nearly 250 years. 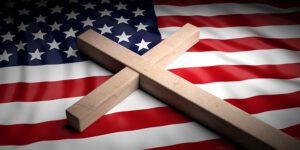