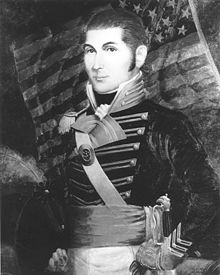 Most have probably never heard of this hero, Presley Neville O’Bannon, but they certainly have heard of his most famous exploit.  He was the United States Marine Corps (USMC) Officer who led the successful attack on Derne (or Derna), Tripoli (present day Libya). This attack is immortalized by the line “to the shores of Tripoli” in the Marine Corps Hymn.  His is a story of duty and heroism, but as often happens, he received little recognition from his military superiors or the US Government in general for reasons known only to them. Although it is the exception rather than the rule, we can find other examples of the same shabby treatment to heroes throughout our history, but O’Bannon is one of the earliest.

Presley, one of 13 children, was born in 1776 in Fauquier County, Virginia.  His father, William O’Bannon was a Captain in the Continental Army during the Revolutionary War.  His mother, Anne Neville, was a sister of Revolutionary War General John Neville.  Presley was appointed Second Lieutenant in the young USMC on 18 January 1801 and served in domestic postings before going to sea in 1802.  While in the Mediterranean, he was promoted to First Lieutenant on 15 October 1802.  He returned to the US in 1803 and served at the Marine Barracks in Washington, DC until he was deployed to the Mediterranean again in May 1804. While serving on the USS Argus, he was selected for a “special mission”.

These were turbulent times in the Mediterranean and the newly formed United States was being humiliated by the Barbary States (Algiers, Morocco, Tunis, and Tripoli) by paying tribute to allow the USA to peacefully sail in the Mediterranean Sea.  The Barbary rulers were satisfied with the arrangement except for the Pasha of Tripoli (Yusuf Karamanli) who demanded more money more often.  To show his dissatisfaction with the US he had the flagstaff of the US Consulate cut down, which led the US to declare war on the Barbary States and to cease tribute payments.

This state of war resulted in the US sending additional Naval forces to the Mediterranean.  One of these ships (USS Philadelphia) went aground on the coast of Tripoli during a storm.  The crew was captured and imprisoned at Derne.  A US offer of ransom and a bombardment of Tripoli failed to convince the Pasha to release the Americans.

At this point, one man had the guts to propose taking direct action against the Pasha, and replacing him with his brother, Hamet.  This man was William Eaton, a former Army Officer, who was the US “Naval Agent for the Barbary Regencies.”

The Jefferson Administration and Hamet agreed, so Eaton started the ball rolling by assembling his invading force in Egypt.  His army was made up of about 500 mercenaries, soldiers of fortune, and O’Bannon’s detachment of seven Marines and two US Navy Midshipmen.

This army marched 600 miles through the brutal Libyan desert and reached Derne, Tripoli on 25 March 1805.  After a demand to surrender was rebuffed, Eaton attacked the Derne defenses on 27 March with supporting fire from US Naval vessels.  However, the defenders were well prepared and were successfully resisting the attack.

At this point Lt. O’Bannon, his seven marines, a few Greek mercenaries, and some artillery crewmen attacked across the battlefield under heavy musket fire and successfully breached the walls.  After brutal hand-to-hand fighting, O’Bannon planted the US flag on the ramparts, which was the first time in history that our national banner was raised on foreign soil during war.

The attackers repulsed several counterattacks and after a bayonet charge that drove the enemy from the field, Derne was secured on 28 May. The assault on Derne would eventually be remembered by the line in the Marine Corps Hymn “to the shores of Tripoli.”

It appeared that a new treaty that would end the Barbary piracy and bring peace to the Mediterranean was on the horizon.  However, this is where the duplicity of O’Bannon’s and Eaton’s superiors rears its ugly head as the US Government screws them and places them in greater danger.  Not suspecting they were being sold out, they asked Consul General Tobias Lear for reinforcements because they were still fighting off counterattacks and were greatly outnumbered.

What they didn’t know was that Lear was negotiating a treaty with Yusuf, which was signed on 4 June 1805.  Eaton and O’Bannon were informed by Commodore Samuel Barron, Commander of the US Naval Forces in the area, that their agreement with Hamet was nullified and that Yusuf was considered the rightful ruler.

The Americans were ordered to withdraw and board the USS Constellation under cover of darkness.  Hamet’s Arab supporters realized they were being abandoned and rushed the last boarding boat with curses and threats.  This had to be very humiliating for O’Bannon and Eaton who were already deeply disappointed by the situation.

To their surprise, Eaton and O’Bannon were given a hero’s welcome when they arrived in Philadelphia.  Common people and local politicians admired their feats of bravery in service to the USA.  O’Bannon was presented with a gold saddle and white satin cover for his horses.  He had managed to return with two Arabian horses and Hamet had given him a jeweled Marmeluke sword in recognition of his bravery at Derne.  Somehow the saddle, satin cover and sword were lost.  My belief is that they were confiscated by the United States Government, which is the fate of outside gifts to those serving the USA.

O’Bannon rode home to Virginia on one of his Arabs, and in December 1805 he was honored by the Virginia General Assembly.  They authorized the making of an ornate sword with a Marmeluke hilt with a depiction of him raising the flag at Derne.  (This sword was finally completed and awarded to O’Bannon in 1812.)   A modified design of this sword was adopted as the official USMC Officer’s dress sword in 1825.  The sword was adopted by Marine Commandant, Archibald Henderson, in recognition of O’Bannon’s distinguished service and is still in use today.

O’Bannon certainly appreciated all the attention in Philadelphia and Virginia, but he rightfully expected a promotion, or at least a Brevet rank from the Marine Corps. This was not to be, so he resigned his commission in March 1807.  Marine Commandant, Franklin Wharton, penned a very terse acceptance letter, making no mention of O’Bannon’s heroic service in the Barbary War.

After his resignation, O’Bannon briefly served in an artillery unit and a cavalry company, but by 1809 he was done with military service and returned to Virginia.  He married Matilda Heard, granddaughter of Revolutionary War General David Morgan, in 1811.  Following thier marriage, the couple sold off their Virginia property and moved to Kentucky where they had recently inherited property.  O’Bannon became involved in local politics and served in both houses of the state legislature in1812 and from1824-1836.

Unfortunately, Matilda suffered from mental illness, which resulted in divorce and remarriage in 1832.  By 1843 much of their property had been sold to cover expenses.  Presley O’Bannon spent his remaining years living quietly in the company of close friends, and according to some, with lingering memories of his glory in the Barbary War.  Matilda died in 1850.

Presley died on 12 September 1850 in Pleasureville, Kentucky where his daughter and a nephew resided.  He was buried with little fanfare in Henry County, Kentucky.  There he lay with little notice until 1920 when a chapter of the Daughters of the American Revolution correctly felt that the “hero of Derne” deserved more recognition.  They had his remains moved to the State Monument Grounds at the capital in Frankfort, Kentucky, and erected a monument in his memory.  They also promoted him to “Captain” on the monument.

Presley Neville O’Bannon is another American who greatly contributed to our national identity, development, and heroic legends, but who was treated badly by his superiors. Finally, in the 20th century three US Navy war ships were named for O’Bannon, and O’Bannon Hall was located at the Marine Basic School in Quantico, Virginia. However, O’Bannon deserves to be much better known by the American public. We always need genuine heroes to admire and emulate.