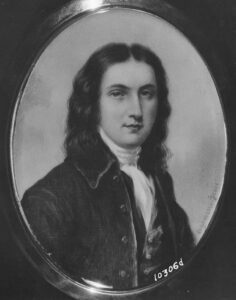 John Hart was a resident of Hunterdon County, New Jersey where he was elected to the Colonial Assembly serving for ten years. He was a New Jersey delegate to the Second Continental Congress and voted for and signed the Declaration of Independence. Afterwards, he represented Hunterdon County in the New Jersey General Assembly for many years. In December 1776 British and Hessian troops raided and looted his farm causing him to temporarily go into hiding. Hart died before the end of the Revolutionary War.

Although there is disagreement on the date and place of John Hart’s birth, his official U.S. Congress biography gives his birth date as 1713 and place of birth as Stonington, Connecticut. At some point, his family moved to Hopewell Township, New Jersey.

John Hart was one of five children born to Captain Edward Hart and Martha Furman Hart. John was baptized at the Maidenhead Meeting House (now the Presbyterian Church of Lawrenceville) on 31 December 1713. Edward Hart was a farmer, public assessor, and justice of the peace. He was also leader of the local militia during the French and Indian War (1756-1763).

Like most men of his time, John had little formal schooling, but he learned to read and write and do figures. His spelling was poor, but that problem was shared by most men. John helped his father build a highly successful farm and later as oldest male; he inherited the farm. John also became a leading member of the community. He was recognized for his honesty and for having common sense. He was also reasonably well-read about law and was a good businessman.

John fell in love with a beautiful young lady, Deborah Scudder from Scudder Falls. She was the only child of Richard Scudder who was prominent in town affairs. To court Deborah, John had to ride horseback 30 miles round trip to see her. Deborah and John married in 1739 and had 13 children. Twelve survived to adulthood.

John Hart began acquiring more property in 1740 when he purchased the 192-acre Homestead Plantation in the town of Hopewell. In 1751 he and a brother bought a mill they named Daniel Hart’s Mill. By the 1770’s John Hart had become quite prosperous and the largest landowner in Hopewell with over 600 acres. In 1773 John Hart and his son-in-law John Polhemus bought a substantial mill enterprise in Rocky Hill, New Jersey. John Polhemus became a militia captain and then a captain in the Continental Army.

John Hart was also generous and civic minded. In 1747 he donated a parcel of his property known as the “lower meadow” to the local Baptists so they could build a church and cemetery.

As a concerned citizen, John Hart began his public service in 1750 when he was elected to the Hunterdon County Board of Chosen Freeholders. He was elected Justice of the Peace in 1755, which meant he was considered a “gentleman” and could be called John Hart, Esquire. From 1761-1771, Hart served in the Colonial Assembly representing Hunterdon, Morris, and Sussex counties. He was appointed to the Court of Common Pleas in 1768.

John Hart was a strong proponent for independence and arrived in Philadelphia later in June. Hart voted for the Declaration of Independence and then was the thirteenth man to sign it.

In August of 1776, a General Assembly was established under the new New Jersey Constitution. Hart was elected to the body and was also elected Speaker. Shortly afterward, he traveled to Hopewell to attend to his ill wife. Sadly, Deborah was terminally ill and died on 8 October with John by her side.

The family had little time to mourn their loss because in December Washington’s Army was retreating across New Jersey and British and Hessian troops were ravaging the Hopewell area. Two of the youngest Hart children had to find refuge in the homes of relatives.

John Hart became a hunted man because he had signed the Declaration, was part of the new state government, and had two sons that were Continental officers. He had to hide in the woods and caves in the Sourwood Mountains. This was quite a physical ordeal because of his age. A few people allowed him to spend a night in their homes, but this was dangerous for the homeowners.

The Hart home and property were looted and severely damaged by the British and Hessian troops. The Continental victories at Trenton and Princeton finally forced the British out of the Hopewell area in late December, so Hart returned home.

While repairs to his property began, John Hart continued his service as Speaker of the Assembly. He was re-elected twice and served until 7 November 1778.

In June 1778, Hart offered General Washington his property for the army to use as a bivouac area. Washington accepted and 12 ,000 men occupied Hart’s fields during the growing season. Hart and General Washington dined together at least once during the bivouac. The army was able to rest and refresh for a few days before they moved out on 24 June. Four days later the Continental Army won the Battle of Monmouth, New Jersey.

On 7 November 1778, John Hart returned to his home in Hopewell. Two days later he notified the Assembly he was too ill with “gravel” (kidney stones) to return to Trenton. He suffered with this very painful condition for more than six months and died on 11 May 1779 at age 66. John and Deborah are both buried at the Old Baptist Meeting House Cemetery on land they had donated to that church.

Like many of our founders, John Hart died owing money. Due to the shortage of hard currency, depreciation of colonial money, and a glut of land on the market as Loyalist land was being confiscated and sold, most of Hart’s property was sold for a pittance

John Hart had signed the Declaration of Independence but died four years before the end of the Revolutionary War while the outcome of the war was still in doubt. Had he lived he could have contributed significantly to building the new Government of the United States. He was not a firebrand like the Adams’ nor an intellectual like Jefferson but was a self-made man that could be depended on to carry his weight.

Hart did not leave much of a paper trail and little was written about him. However, Declaration signer from Pennsylvania, Benjamin Rush described him as “a plain, honest, well  meaning Jersey farmer, with but little education, but with good sense and virtue enough to pursue the true interests of his country.”

There are no heroic statues of John Hart. There are a few streets and roads in New Jersey named after him, but I could find no other memorials except at his grave. John Hart is an ancestor of Congressman John Hart Brewer and House Majority Leader Steny Hoyer.